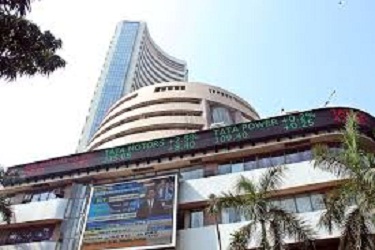 The benchmark Sensex fell 470.4 points on Monday, extending its two-day slide to 1,020 points, or 2.1 per cent. Concerns over the pace of economic recovery amid a strong second wave of infections globally is prompting investors to scale back bullish bets, say experts. Also, rising US bond yields and strengthening of the greenback have raised concerns of pushback from foreign investors.

Experts said many investors are opting to book profits ahead of the Union Budget on fears that the Centre will raise taxes to boost income hit by the Covid-19 pandemic.

“Like global markets, India is overbought and waiting for a negative trigger,” said Deepak Jasani, head of retail research at HDFC Securities. “Markets look poised for a smaller correction, as the narrative around Covid-19 globally suggests that the problem might still not be behind us,” added Nikhil Kamath, chief investment officer at True Beacon. “A second wave of lockdowns, following the trend of what’s happening globally, is a possibility.”

Global, markets were mixed on Monday with Chinese equities posting gains, following a strong showing in the December quarter, with its gross domestic product (GDP) growing 6.5 per cent. The world’s second largest economy has managed to expand at a faster pace than before the pandemic, even as most major economies have struggled.

The Shanghai and Hong Kong markets rose over a per cent on Monday, while other Asian markets struggled. Japanese stocks fell about a per cent, Australian benchmark declined 0.8 per cent, while South Korean markets sank 2.3 per cent, led by a huge drop in the shares of Samsung.

Foreign portfolio investors (FPIs) bought shares worth Rs 650 crore on Monday. Even on Friday, overseas investors were net-buyers to the tune of Rs 1,000 crore even as markets fell over a per cent.

So far this year, FPIs have pumped in over $2.5 billion. However, some believe there could be some reversal in flows if the dollar continues to gain against global currencies. Also, the rise in US bond yields could act as another headwind.

The decline in the broader markets was sharper, with the Nifty Midcap 100 and Nifty Smallcap 100 declining 2.1 per cent and 1.8 per cent, respectively. The India Vix index continued to edge higher. It ended at 24.4 per cent, up over 22 per cent this month. Analysts said the index tends to rise ahead of any big macro-event such as the Budget, which is slated for February 1.

Barring four, all Sensex components ended with losses. The biggest losers were ONGC, down 4.6 per cent; Sun Pharma, down 3.7 per cent; and IndusInd Bank, down 3.7 per cent. Reliance Industries and HDFC Bank gained 2.4 per cent and 1.2 per cent, respectively, and made a 200-point positive contribution to Sensex.

Shares of leading non-banking financial companies (NBFCs) tanked on fears that the Reserve Bank of India (RBI) may soon direct them to maintain a statutory liquidity ratio and a cash reserve ratio. M&M Finance fell 6.4 per cent, Cholamandalam Investment, and Bajaj Finance declined nearly 4 per cent each.

“Any such strict regulations, if implemented at a time when economic growth is very weak, could severely constrain ability of NBFCs to lend and further jeopardise growth,” Macquarie analyst Suresh Ganapathy said in a note to clients. 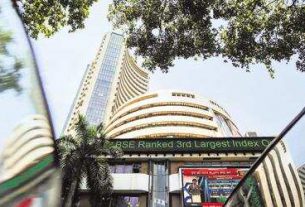